Spain and the Transatlantic World, Past and Present 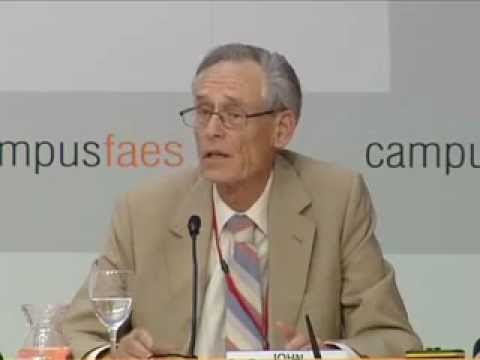 Navacerrada (Madrid), 04.07.12.- The historian and Prince of Asturias laureate for Social Sciences, Sir John H. Elliott, has pronounced a conference, ‘Spain and the Transatlantic World, Past and Present’, at the 2012 FAES Campus. The renowned scholar was introduced by the regional president of Madrid, Esperanza Aguirre.

“The Transatlantic dialogue is more necessary than ever in a globalised world. I’ve always regarded the UK and Spain as two nations whose geographic location and historical role has granted them a unique opportunity to act as transatlantic bridges between Europe and the American world”.

“While Spain’s Atlantic past helps Europe interpret the countries of the new world and vice versa, it is also true that the old transatlantic ties make the process of interpreting History more perilous and difficult”.

“The re-emergence of old resentments should be avoided; a complicated task if some Spanish company convey the impression of being too powerful or if the country suffers demagogic criticisms of a nationalist kind. There’s no other option than answering with maximum sensitivity, and this requires having full knowledge of the reasons that give rise to alterations that seem to lack any justification whatsoever”.

“Spanish and Latin American history is complex and should not be reduced to simplistic conclusions, as is the case with nationalist and anti-Spanish narratives, which have managed to dominate the discourse. New ages must have new approaches, which in this case are reflected in what seems to be the beginning of a re-appreciation of the Spanish contribution to the history of its societies, which seem to have a much more promising future, according to a new generation of Latin American historians”.

“The Constitution of 1812 represents a true Atlantic Constitution linking the Spaniards from both hemispheres in a sole nation with a sole legislation, which granted a new sense of national identity”.

“There are signs that the impact of the Constitution and of the Cadiz Cortes was much deeper that what was recently believed, as they represented a brave attempt at changing an authoritarian regime into a constitutional one at both sides of the Atlantic, in accordance with the liberal and national principles expressed in the American and French revolutions and when legislating not only for Spain but also for the Overseas Empire, thus making a unique and extraordinary constitutional experiment with lasting consequences”.

“During the years of the Cortes and the Constitution of Cadiz and due to their influence, a true political and cultural revolution took place in America which evolved at the same time as it led to the fragmentation of the Overseas Spanish Empire. That was the moment when the foundations for a free press were set in America and the new continent received not only the concept but also the practice of popular representation which completely changed the political landscape and which led to free elections and the consideration of the national State as a deliberate act by free citizens with equal status”.

“The Spanish democratic Transition served as a model to Latin America. The democratic Spain has followed an intelligent policy toward the countries of its former empire. Cultural policy is particularly valuable as it has introduced a new generation of Latin Americans to the realities of modern Spain and has managed to erase many of the old clichés. It’s only a small minority, but it will have an important influence in their own countries ".