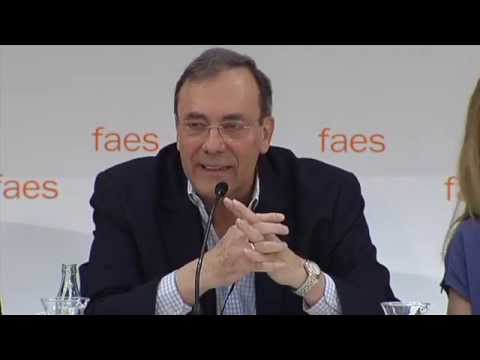 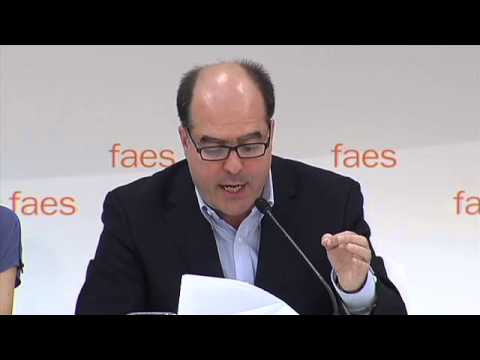 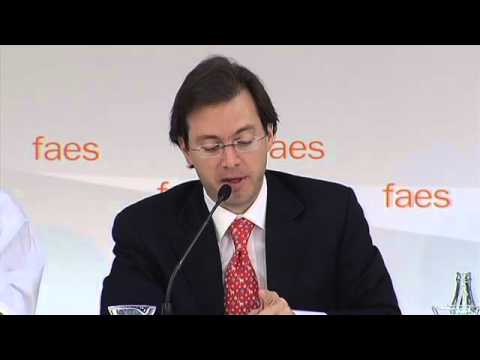 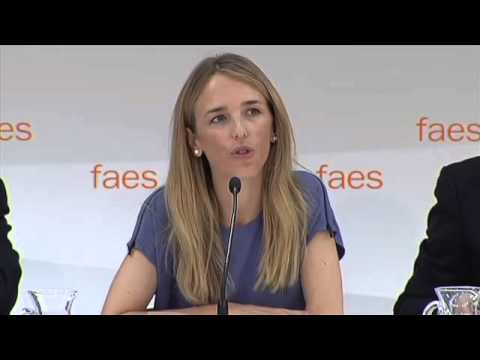 _ Muchacho: “People who do not behave democratically cannot receive the blessing of people that do it”

_ Borges: “Freedom of conscience is the deterioration of totalitarianism”

_ Montaner: “The 20thcentury socialism makes use of democratic institutions to put an end to democracy and to the Rule of Law”

_ Álvarez de Toledo: “To those who flirt politically with Chavism or are financed by it: we do not want that model in any country of the world”

_ Zarzalejos: “FAES Foundation will keep holding the head high, when we are asked what we have done while people were risking their lives for democracy in Venezuela”

This morning, 2014 FAES Campus held a roundtable with the representatives of the Venezuelan democratic opposition. They provided a first-hand view of the current situation in Venezuela and analysed the links between democracy and the Rule of Law. María Corina Machado and Julio Borges, Deputies of Venezuela’s National Assembly and Ramón Muchacho, Mayor of Chacao, participated in the conference and were introduced by the Cuban writer Carlos Alberto Montaner.

María Corina Machado, who was banned from leaving her country, sent a video in which she states that throughout the last months the Venezuelan Government’s “pseudo-democratic mask has been removed in the face of the evidence of systematic repression and abuses of human rights”. He added that “it lost the support in the streets and all its convening power, all its international legitimacy and popular support”. According to her “the regime showed that the only two things it can count on are repression and persecution”.

Machado called for “arranging from the bottom up all the Venezuelan social and political organisations in order to reach the change constitutionally as soon as possible”. “This is a fight to preserve values and to build a responsible society, free and prosperous” she argued, and, to do so, “we need democrats from all around the world to support us”.

From now on, she stated that “a new era that leads us to an unstoppable democratic transition is coming” where “we have to show the world that the citizen’s power and political leadership exists in order to give transition the stability to advance and reach profound economic, political, institutional and international relationship changes in Venezuela”.

Machado referred to the Venezuelan Government’s “great historical chance” of putting an end to the “model of the increasing social control to perpetuate indefinitely in the power”. The Government “on behalf of poor people abused all the essential elements of democracy” and “destroyed the judiciary system, the country’s productive capacity and carried out a process of hegemony and media control”. “On behalf of poor people, the amount of poor people increased, while Venezuela is experiencing its best period of oil bonanza of its history, and a control system that seeks to lead society to poverty, violence, darkness and fear has been put into practice”, she stressed.

Ramón Muchacho, Mayor of Chaco, claimed that “people who do not behave democratically cannot receive the blessing of people that do it”. “Support should neither be given, nor received”, he highlighted. Throughout his address, he argued that “we Venezuelans have largely repaid the experiments of Chavism” and he called for international community solidarity.

Muchacho explained that, in Venezuela, following the arrival of Chavism, “the link with the Western values was progressively weakened” and therefore asked Venezuelans to embrace them again. In this respect, he opts for strengthening the Atlantic link, what he said will be positive for “the fight against all democratic perversion” that is also being faced by the West, according to him.

Julio Borges pointed out that “freedom of conscience is the deterioration of totalitarianism”, to the same extent that “the elimination of conscience” is its triumph. He argued that, to do so, totalitarianism makes use of lies so that “people get stuck in a prison of words, where everything is arranged by the State power discourse”. Thus, he issued a warning “on the evil of anti-politics, on the prejudice against politics and the political parties as the great obstacle for happiness, on the false moralism and moral nihilism”.

Finally, Carlos Alberto Montaner stated that “the 20thcentury socialist variable is the electoral means: using democratic institutions to put an end to democracy and to the idea of the Rule of Law”.

MORE SUPPORT TO THE OPPOSITION

When introducing the roundtable, Cayetana Álvarez de Toledo, FAES Foundation Director of the International Department, sent a message “to those who flirt politically with Chavism or are financed by it”. “We do not want that model neither in Spain, in Venezuela, nor in any country of the world”, she argued. Moreover, she stated that “the Venezuelan opposition deserves much more support than what it is receiving”, if not “for conviction, at least for interest” because, according to her, “also bad models are exported”.

In this respect, Javier Zarzalejos, FAES Foundation Secretary-General, added that “this Foundation will keep holding the head high, when we are asked what we have done while men and women were risking their lives for democracy in Venezuela”. He also insisted on requiring more international support for the opposition of said country and on the need of “denouncing the double morality of people that would not bear in their own countries what they support in others”.