Wednesday 3, on the first day of the International Course of the 2013 FAES Campus Calderón Stresses the Importance of the Atlantic Relationship for Progress 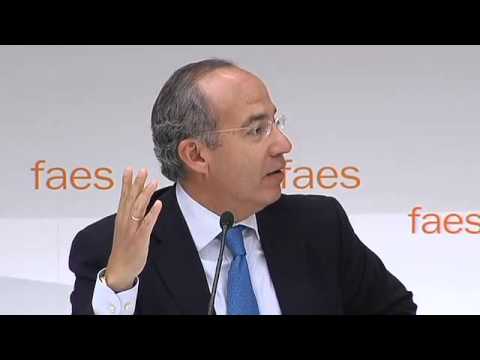 The former president of Mexico, Felipe Calderón, has opened the International Course of the 2013 FAES Campus titled "A New Atlantic Relationship". During his address, which was introduced by the former Prime Minister and president of FAES Foundation, José María Aznar, Calderón has stressed the importance of the Atlantic relationship and the opportunity posed by the Atlantic as a point of growth, development and prosperity because of the potential gathered in its basin”.

Calderón has said that there's a "huge growth and employment potential in Europe-Latin American relations" and has stated that "there's a series of elements that we share and about which we must find guidelines for the future". In this regard he declared that "besides economic ties, Mexico and the European Union share values and principles like respect for human rights, democratic and freedom values which must form the foundations of a common future of prosperity for the Atlantic and around the world." "We must retake the commitment not only to announce loud and clear our values but to make them emerge in all those places where they are not in force", Calderón stated.

During his address, the former president of Mexico also said that "Spain and Europe are undergoing one of the most difficult moments of the last decades in the economic front, but precisely because of this not losing the compass of essential values and basic references is more important than ever. "Freedom, justice, democracy, Rule of Law, and respect for the environment must be the guidelines leading Spain and the whole of Europe to retake the road of growth and progress," he said.

Calderon has stressed, throughout his speech, the need to seek "alternatives in Europe and in the world to build an economic solution and which must be based on freedom, both political and economic freedom". In the latter case, the former president of Mexico pointed out that it should be "expressed in free trade as a tool that generates welfare and profits." In this sense, Calderon said that "many of the great mistakes made by countries and governments is to ignore this basic principle of trade, that is, that the greater the openness and commercial level the greater the welfare and gains."

"For there to be trade--Calderon said--you have to believe in human freedom in economic terms. For there to be investment there must be Rule of Law. That's why it is so important to be a country of laws, and that is key to the growth of Latin America." He also stated that "the key to a global economy is not being dependent on a source of income but in being an efficient link in the global economy, because reality and the world are global."

Finally, Calderon said that "not everything's economy." "In the same way economic freedom is an aspect that can get us out of the global recession, political freedom is also an essential reference for comprehensive and sustained human development," Calderon said , who also added that "democracy to achieve justice in human freedom" is necessary.

In this sense, José María Aznar said about Calderón during his introduction that "Mexico is a key ally to keep in mind" and that "every time Spain and Mexico have taken initiatives together things have worked reasonably well." In Addition, he noted that "the struggle of President Calderón to consolidate Mexico in the Rule of Law, against organised crime and to make institutions increasingly robust and credible, make his presidency worthy of praise, respect and an important milestone regarding Mexico's future."