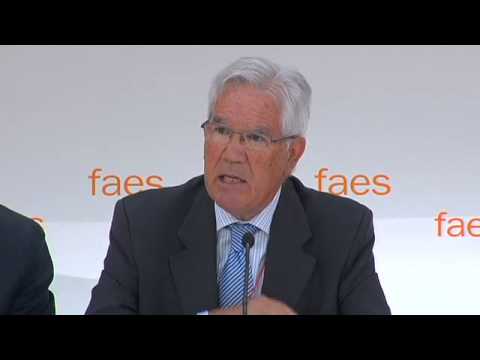 The Former President of the Constitutional Court, Álvaro Bereijo Rodríguez has participated this morning in the Constitutional Course of the 2013 FAES Campus, where he delivered a lecture entitled 'Spain's Necessary Reforms: the Constitution and the Territorial Articulation of the Spanish State'. In his view, "the challenge faced by Spain today is that a State reform does not have to be a pendulum blow or a return to centralism, but a reform that allows us to adapt successfully to the EU and the global world" Rodriguez Bereijo assured, which was introduced by the professor of the École des Hautes Études en Sciences Sociales, EHEDD, of Paris, Jordi Canal.

In the words of the former president of the Constitutional Court, "the biggest problem that our Constitutional State has today is not the 'deepening of the self-government'; today, the real challenge of the Constitution and the State is how to prevent the risks of political fragmentation that threaten to centrifuge the State." "The problem is how to articulate mechanisms that enable to emphasise unity and solidarity, that take into account 'the whole over the parts'", he analysed.

In this sense, Rodriguez Bereijo said he feared that "certain reform proposals in search of federalism, the 'fetishism of names' articulate the 'asymmetry' of the so-called 'differential facts' and end up creating new and serious tensions".

According to the jurist, "our political and territorial decentralisation process has been profound and very fast" and "has been successful in aspects of territorial cohesion". Instead, "It did not achieve the expected success in 1978 with regard to the old question of how to articulate territorial diversity, particularly the Basque and Catalan nationalisms," he regretted.

"The 1978 Constitutional pact was about generosity and spirit of political harmony, but that has not served to prevent disloyal behaviours," Rodriguez Bereijo recalled. In this sense, he explained that "the Constitution of 1978 does not give the term 'nationalities' any legal effect whatsoever, let alone a special and differentiated legal status". "That Constitutional silence is not a regulatory gap but a conscious and deliberate decision. There was an 'apocryphal commitment' to leave the meaning and its effects in silence", he ratified.

Rodriguez Bereijo said that "despite the wide space for self-government provided by the Constitution, nationalist claims have become increasingly radical and extreme." "The price we have paid for not having a common and shared understanding of Spain as a nation is a lack of common elements, in contrast with the policies regarding themselves deployed by the Autonomous Communities," he noted.

"A constitutional framework as open and flexible, inherently conflictive and permanently stressed, inevitably becomes State instability," the president of the Constitutional Court said. Consequently, "it dooms the Constitution to a daily plebiscite and an ever-ascending race of powers by the Autonomous Communities that may end up breaking the coherence and unity of Spain".

Rodriguez Bereijo declared that "our problem today is the big question of any political decentralisation: the allocation of who does what". "In the Spanish and our Constitution's case everyone does everything", he said, which according to him is the reason that "the constitutional order should be interpreted in the sense of transforming the exclusive capacities into shared ones and reducing the capacities belonging solely to the State".

"What was just a quick outline in the Constitution, has become a centrifugal drift that has led to the financial instability of the system of territorial organisation, which the economic crisis has done nothing but bring out to the light," he said.

Thus, Rodriguez Bereijo has declared to be in favour of a Constitutional amendment that is "very measured and calculated". "If in 2003 I was rather in favour of the Constitution's resistance to the passage of time by updating and modulating its contents through consensus and evolutionary interpretation, today I have changed to a reform of the Constitution," he expressed.

"We need a clearer definition that is simple and functional of the distribution of powers, which could be done by the fastest and least politically expensive way provided by Art. 167 EC, by a Bill to modify Title VIII of the Constitution," he considered.

Rodríguez Bereijo has claimed to be "convinced of the advantages of the Autonomous State". "We will hardly have a territorial model that's more open, flexible and dynamic than the Autonomous State resulting from the Constitution [...] I think it has been positive in many ways, but it went wrong only because of us", he said. He therefore called to "correct the design to avoid the dysfunctions of a State that's increasingly inefficient".

The former president of the Constitutional Court regretted that the Court, whose jurisprudence has said that it "could have been an element of rationalisation and control", "has not always worked as expected, with a State perspective". On the contrary, he said, "it has mechanically repeated the clichés when the State and its problems were actually very different."