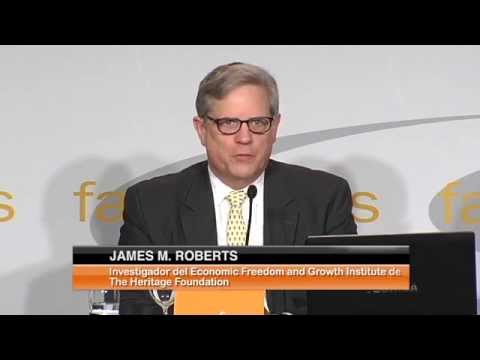 _ Marín: ‘Keeping an ambitious reform agenda must be an unavoidable goal for the end of this term and for the next’

_ Roberts: ‘The conclusion of Europe’s austerity programs is that it is more important to cut spending than to raise taxes’

_ Spain manages to stop three straight years of declines and repeats its 49th position in the world rank, after increasing its score by 0.4 points

The director of the Economic Office of the Prime Minister, Álvaro Nadal, stated that ‘we’ve managed to do more than anyone else with regard to increasing competitiveness, and it is being acknowledged internationally’. ‘Spain is more competitive now than when we entered the euro and wage moderation has been a key aspect of that strategy. For the first time in history, we can increase competitiveness increasing purchasing power with regard to Germany,’ he declared during the launch of the 2015 Index of Economic Freedom (Read it here), organised by FAES Foundation.

The researcher of The Heritage Foundation, James M. Roberts, andthe Director of Economics and Public Policy of FAES, Miguel Marín, also participated in the event. Miguel Marín stated that ‘the Spanish economy must continue pursuing freedom and in this sense, keeping an ambitious reform agenda must be an unavoidable goal for the end of this term and for the next, as the only way to consolidate an economic growth that is healthy, balanced and capable of generating quality jobs.’

The Index, compiled by The Heritage Foundation and The Wall Street Journal, analyses 178 countries and shows that economic freedom has increased worldwide for the third consecutive year, reaching the highest score in its 21 years of history, a record of 60.4 points. This increase reflects a general rise of 2.8 points since 1995, although the growth rate has slowed down compared to last year’s 0.7 points, Roberts pointed out.

Spain repeats its 49th position in the world rank, the same as in 2014, but it manages to stop three straight years of declines and increases its score by 0.4 points, until reaching 67.6 points. Our country has improved in six of the ten variables analysed, mainly those regarding freedom of investment, monetary freedom and Government spending. In relation to Europe, Spain is ranked 21st of the 43 countries in the region, below the EU average but above other countries of southern Europe. Roberts summarized the situation by explaining that ‘Spain is in the top half of all the countries included in the study.’

During the presentation of the report, Nadal said that ‘the diversified and open economy of Spain today has much to do with economic freedom, the most highlighted variable being the increase of exports with regard to GDP’. In this sense, he valued the increase in exports in the last four years, from 25% to 32%, ‘which has not been done by anyone in the world’.

Beyond the gains in competitiveness and labour costs, he reviewed the energy, financial and administrative costs of reforms undertaken by the Government. Nadal insisted that there was an alternative to the rescue and to getting out of the euro, the one followed by the Government. ‘Growth requires two conditions: structural reforms, which need a reallocation of resources to more competitive sectors, and macroeconomic stability’ he underlined.

Miguel Marín, meanwhile, said that ‘economic freedom is not an ethereal or utopian concept’. ‘The disappointing response of our economy to the crisis can be explained in part by the “reforms standstill” of 2004 and the measures which eventually determined a less flexible economy and less adapted to the reality of the global environment,’ he diagnosed.

The Director of Economics and Public Policy of FAES also stated that ‘the outbreak of populism that Europe is suffering involves shifting the economic debate back to the twentieth century, so we have to revise what has brought us here. All populisms, whether from the left or the right, are enemies of economic freedom, and all without exception conveniently place it at the heart of all the evils we suffer.’

For Marin, ‘economic freedom is at the centre of the solutions of the countries that have managed to get over the crisis, and whether fortunately or unfortunately, there is more than enough empirical evidence to support this claim.’ ‘We could talk about Venezuela and its revolution against freedom, which has only brought a failed economy with serious sustainability problems for the State. And we could mention Greece, a country that just when it was beginning to emerge from the tunnel, has made a shift towards a populist government that has brought nothing more than internal paralysis and international mistrust,’ he said before stating that ‘today, it is necessary to reassert the principles we share as supporters of economic freedom as the engine of success of any economy.’

Finally, James Roberts explained that the advance of economic freedom around the world in the last year has been driven by improved trade freedom, monetary freedom and freedom from corruption, while the most pronounced loss has been the one regarding a limited government, which measures the control of public expenditure. ‘The conclusion of the austerity programs that have been carried out in Europe is that it is more important to cut spending than to raise taxes,’ he stated.

In this sense, the Index states that ‘the most effective policy to increase wealth and economic growth is not to increase their own spending or their regulations, as both reduce economic freedom. Instead, it is likely that the best results will be achieved through policy reforms that improve the incentives that drive business activity, creating more opportunities for greater economic dynamism’.

The Index of Economic Freedom has been published annually since 1995 to measure the degree of freedom of world economies. The study analyses in detail each country in ten variables subsumed into four groups–Rule of Law, size of government, regulatory efficiency and openness of markets–and establishes a ranking that this year is led by Hong Kong, Singapore, New Zealand, Australia and Switzerland.

‘The link between economic freedom and development is clear and strong,’ says the 2015 study, which states that ‘countries that are increasing their freedom enjoy greater economic growth, more jobs, higher incomes, better healthcare and many other benefits. Those who are not, are being left behind and, in the worst case, remain stuck in stagnation and poverty. This failure is inexcusable. And most importantly, it is preventable.’